Imagine trying to put out a wind-blown forest fire with a squirt gun. That’s what Gerber Products, the baby-food company, felt they were doing in 1997. Someone somewhere started a false rumor about the company that spread like wildfire.

The rumor said Gerber had been involved in a class-action lawsuit and would give a $500 gift certificate to families with children to settle the suit. Supposedly all the parents had to do to get the money was send a claim form and copies of their children’s birth certificates and social security numbers to a post-office box in Minneapolis by October 1, 1997.

Once the rumor caught fire, it began to spread along channels that gave it an appearance of legitimacy: notices were posted in hospitals and sent home with children by schoolteachers. One corporation even put the false notice in the envelope with their employees’ paychecks.

Gerber Products tried to stomp out the bogus story, putting a notice on several internet web sites, tracking down sources of the rumor, and informing the media. Nevertheless, they received over 18,000 phone calls to their toll-free telephone number in the three-week period before October 1 from people requesting the bogus claim form.

The cost to Gerber Products of fighting this rumor was in the millions of dollars.

Passing along a rumor may seem harmless, but someone pays an undeserved price if we are not careful about the truth. Never take lightly the power of the tongue to do harm.

The opponents of Paul refused to look objectively at the facts about Jesus as the Messiah and whipped the mob into a frenzy by making a series of false and inflammatory accusations and rumors against the apostle.

How did he repsond?

-- He lived a life of integrity that proved them wrong!

-- He responded with love and compassion to those that hurt him. 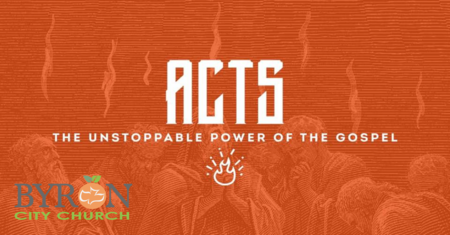 The Unstoppable Power of the Gospel

Acts 26 | Life before Felix, Festus, and the Restus...How do we live our lives before the lost?

The Unstoppable Power of the Gospel

The Unstoppable Power of the Gospel
Acts 25

Acts 24 | Our Responsibilities before Christ

The Unstoppable Power of the Gospel
Acts 24

Subscribe to receive email updates with the latest news.